We've lost sight of what we stand to lose...Make the coral correlation 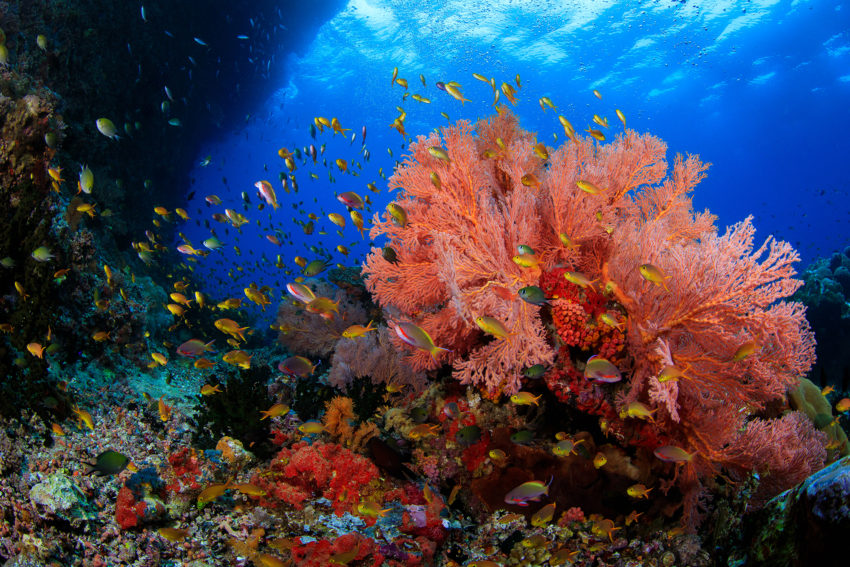 Why should we be worried about coral ‘bleaching’, you may ask? Because:

— The ocean needs the fish to clean it and to feed the other fishes.

— We need the fish to feed us.

— And we need the coral to protect us from severe weather.

But perhaps even more importantly, the increase in sea temperature that causes the coral bleaching is a tell-tale sign that global warming is here, is real and is happening right now.1

If global warming is not halted we risk severe environmental hazards such as rising seawaters, famine, extreme weather, loss of biodiversity, and a global spread of infectious diseases (among other horrors).

We humans are playing a real-life, very dicey, game of ‘hot or cold’ with our planet. As a consequence, our coral are silently dying while we go about our everyday lives – none-the-wiser.

The time has come now, people — to wake-up, and ‘give a shit’ 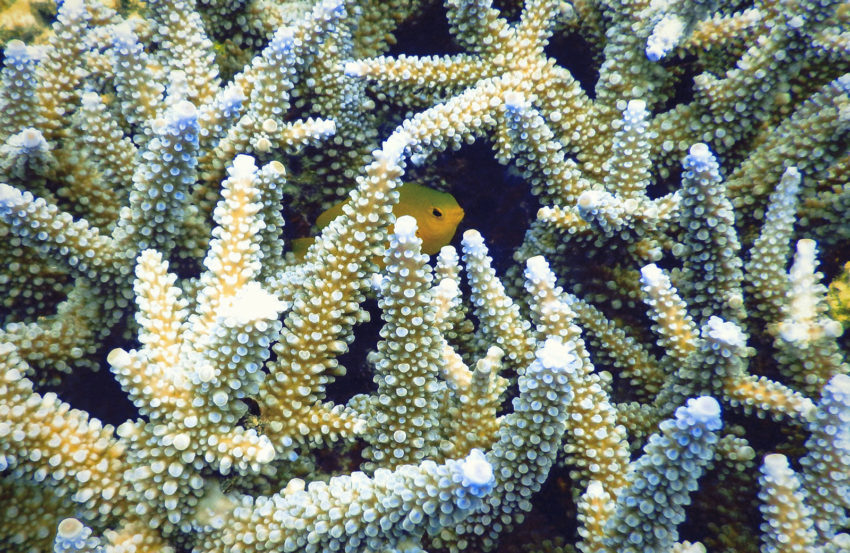 This phenomenon – coral bleaching – was first noticed in the 1980s.

Given the way things are going, we cannot afford to record another global event.

If we care about our wellbeing, then we must care about the health of our ocean. 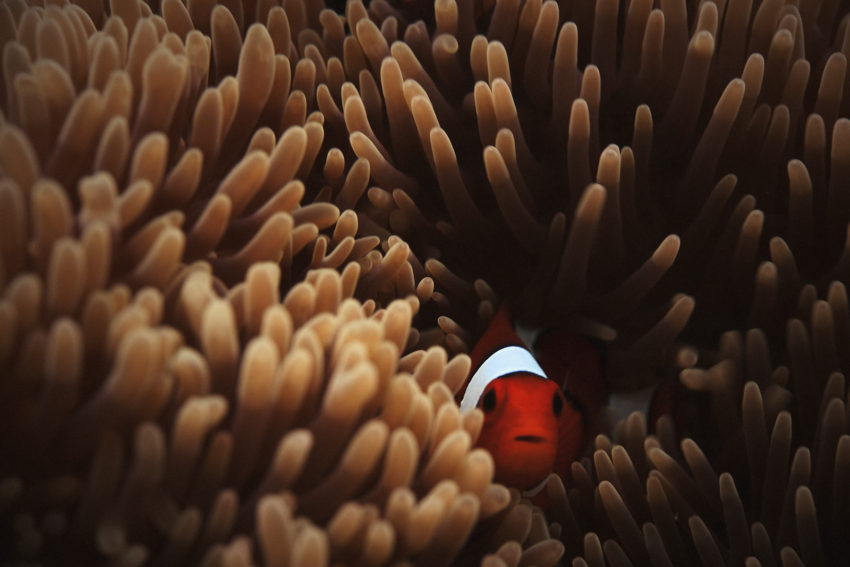 Last year I became absolutely besotted by the ocean after watching several NETFLIX documentaries on my long-haul flight to Europe.

I should probably clarify that all my life I’ve held a healthy reverence for the ocean. Being in awe of it, while also being intensely frightened of it.  (More on this later.)

Note: This is why I was binge-watching these similarly themed docos in the first place.

I’ve been a Greenpeace supporter since I was a kid. When I started making ‘coin’  (working at my parents Fish & Chip shop in Cambridge from the age of eight), I set up a monthly direct debit to Greenpeace — and I’m proud to say I’ve never suspended these payments at any point since. (And, over the years, as my funding improved, I increased the amount of money that I contribute to them.)

Note: I am well aware of the irony of me flying ‘long-haul’ and being worried about the health of the planet.

The ocean accounts for 70% of our planet's surface

The sea also regulates our planet’s temperature. It does this by effectively absorbing 93% of the heat of climate change.

And just for the record, 2018 was the ocean’s hottest year ever witnessed!

Check this out from National Geographic. 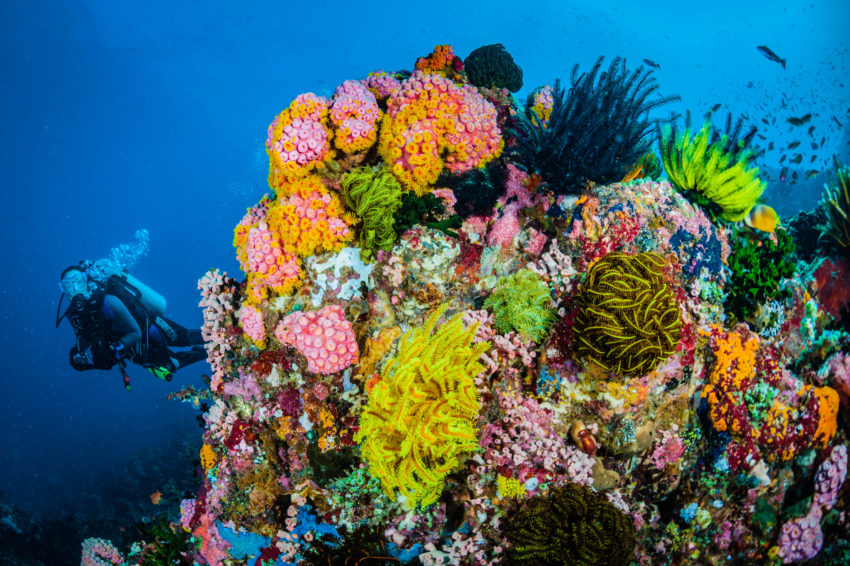 Yo Ho Ho and a bottle of rum!

As a kid, I wanted to be a ‘Rainbow Warrior’ and protect the high sea — and all its inhabitants — from, well, humans. That was, until:

01—I DEVELOPED a sudden — AND severe — shark phobia

I tell ya — JAWS (the Steven Spielberg blockbuster movie from 1978) sure has a lot to bloody well answer for!2

02—I DEVELOPED A strong dislike for waves

(I don’t have a particular movie to blame for this — just the news!)

03—I SUFFERED FROM my first bout of SEA SICKNEss

04—We created a hole in the ozone layer

Having fair skin and living in NZ does not make for a sailor’s life for me — let alone a pirate’s life!

What can I say? I’m just a bit of a wuss, really — with a heart-of-gold. Or maybe, the heart-of-the-ocean? 💙
So, I had to be content with having a long-distance love affair with the sea.

That was, until I recently plucked up the courage (soon after seeing the above-mentioned documentaries) to go snorkelling with DMF at Molokini, off the coast of Maui. I’d like to add that this is despite the tour operator excitedly announcing that someone had seen a Whale Shark in the vicinity! 🐋🦈😳

Note: I had absolutely no idea what a freaking Whale Shark was?! But, my first thought was obviously a gigantic JAWS!😱 The tour operator saw the look of horror on my face and simply said: “It doesn’t have any teeth”. Which was supposed to soothe me. However, I still imagined myself being forcibly shaken and having my limbs viciously gummed off…

Fortunately, my extreme desire to see the coral, BEFORE IT’S TOO BLOODY LATE, ultimately made me ‘walk the plank’.
(As it turned out, I adored this underwater wonderland so much, I  was actually one of the last people back on board.)

Note: Coral reefs can only be found in the tropics. (New Zealand has corals.)

Nature needs a holiday from us humans in order to regenerate itself.

Somewhere beyond the sea... 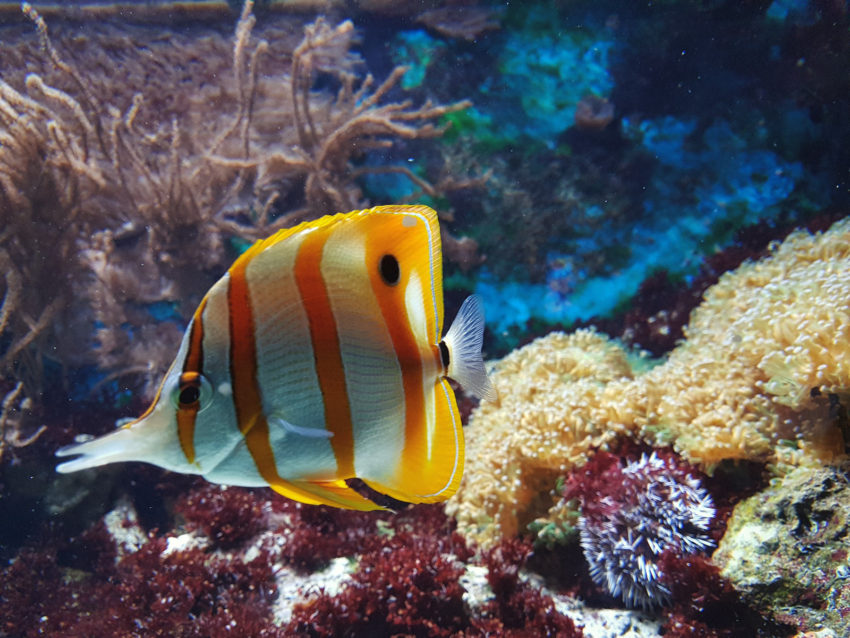 Make no mistake, we ever-increasing and over-demanding humans are 'SHITTING IN OUR OWN NESTS'

Coral is a true 'fair weather friend' to us

I didn’t realise how crazy-cool coral is! Coral is actually an animal (a marine invertebrate) 😳 It’s not just a ridge of rock in the sea formed by the growth and deposit of coral. It’s an entire underwater ecosystem.

Let’s take a look at how complex – how truly impressive – coral is, and why this animal is important for our very survival…

There are many individual species and shapes of coral. Coral reefs are made up of coral individuals. They form a consortium of organisms that work together as one unit (reef).

Note: The Great Barrier Reef is so vast that it can be seen from outer space. And, it is the world’s biggest single structure made from living organisms!

Each coral individual is made up of many polyps held together by a calcium carbonate exoskeleton. Each polyp has a stomach and a  circular mouth surrounded by tentacles. Micro-algae (zooxanthellae) reside within these polyps. The micro-algae gain shelter from the coral, and in return they photosynthesise during the day to feed the coral.

At night, the coral’s polyps expand and its tentacles  come out (which have stingers attached to the ends). It preys on — as well as protects itself from — anything that is foolish enough to get too close for comfort.

Coral individuals establish symbiotic relationships with other sea creatures. For example, Clown Fish (Nemo!) and Sea Anemones protect each other. The anemone cannot sting the Clown Fish with its tentacles (because these fish have a mucous coating), and in return for this refuge, the Clown Fish cleans the coral and wards off other fish (Butterfly Fish & Zebrafish) — that might otherwise eat the coral’s polyps.

Collectively, the coral establishes a neighbourhood for around 25% of marine life to reside.

FYI: The same fish will live its whole life with the same coral individual — returning to it night after night. (Naw!)

According to the documentary, Chasing Coral 0.5—1 billion people rely on coral reefs as their main source of food.

Coral reefs not only provide us with seafood and jobs for our fishermen but also protect the land by providing a natural breakwater — absorbing big-ass waves, storms, and cyclones.

Note: Coral also provides a potential source of new medicines for us. Although I’m hoping these will not be explored at the expense of saving the coral. 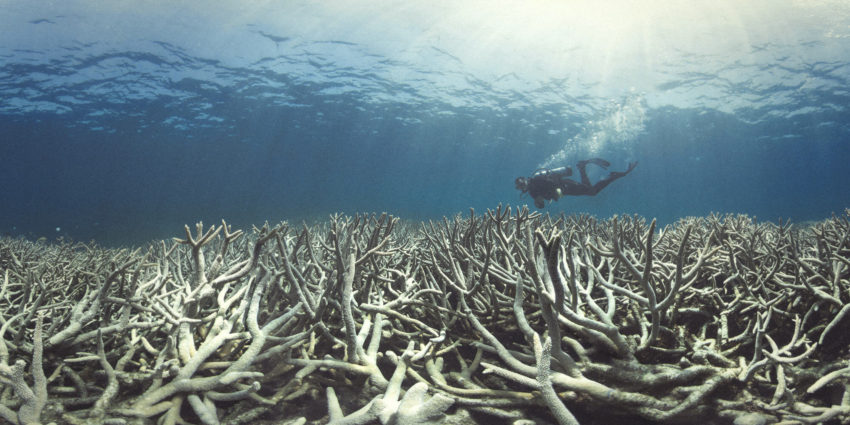 Our ocean has a grave future.

How we know when coral is carking it

Bleaching is a stress response, not unlike a fever in a human — which means parts of our ocean can get sick and die. And, scarily enough, mass bleaching can take place within a couple of weeks. 😱

When the temperature of our ocean rises too high, the micro-algae (zooxanthellae) stop photosynthesising and the coral expel them — because they are of no use to them. And unfortunately, the coral can’t survive without these plants. This is what ‘bleaching’ is — only the white (calcium carbonate) exoskeleton remains.

The different stages of degradation:

FLUORESCENT CORAL
This indicates the coral is stressed by heat or UV rays.

Clean white coral
This indicates that it is alive but that it is in trouble and highly likely to die.

Dead coral
This stuff looks ghostly — as it accumulates fuzzy micro-algae. It’s not unlike an underwater scene from the Titanic movie. Cue the uber-sad theme music 😩

If people saw Rainforests bleaching they would freak out, start asking questions, and try to fix things.

But, coral? Out of sight. Out of mind. 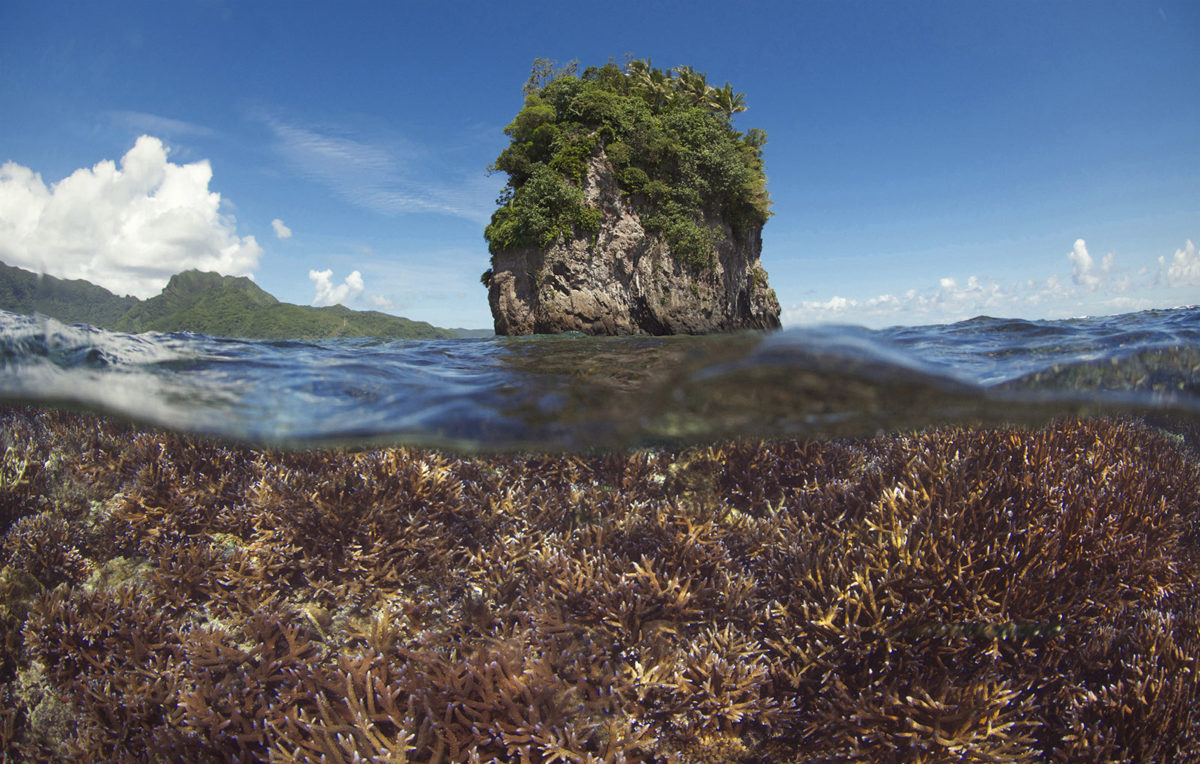 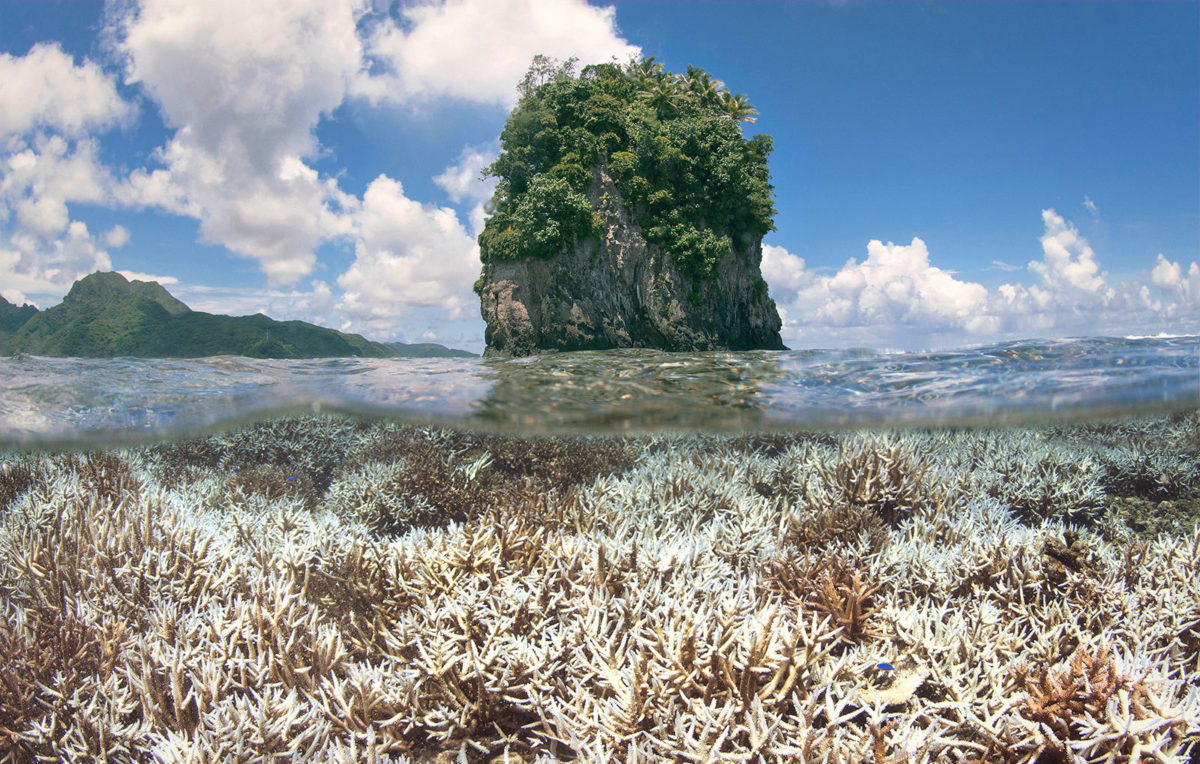 I want to send an almighty thanks to these superb ‘human-doings’ for their tireless efforts to bring this alarming situation (coral bleaching) to our attention.

They literally had to figure out a way to make us see the horror that is taking place. And, in order to show us what was happening to our coral, it took a number of people coming together in a collaborative effort. None of them could have done this on their own.

This is another excellent example of how we need diverse and symbiotic relationships for the greater good.

And most importantly — film viewers!

If coral bleaches in the ocean, and no-one is around to see it… does it even happen?

We've had it all one way — our way — for too long. We need to act in accordance with nature. We all need to act symbiotically. 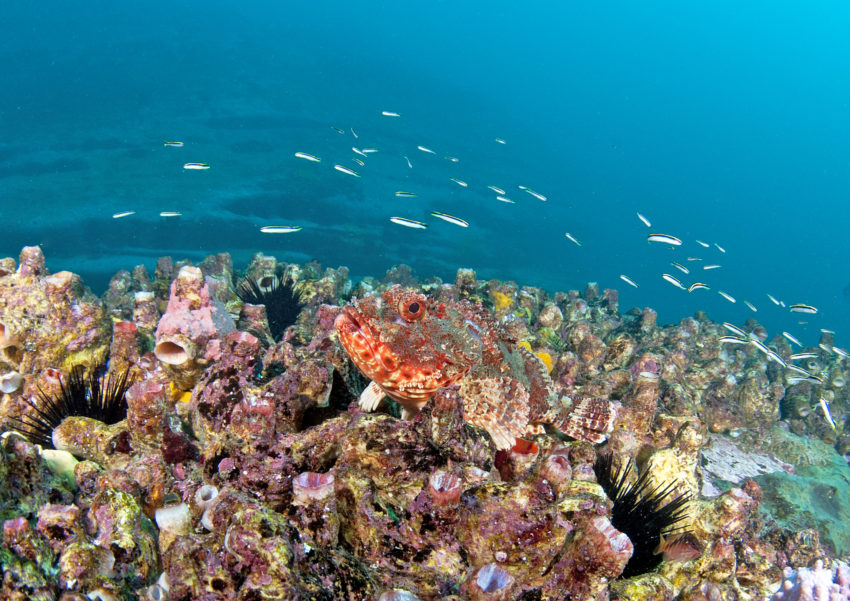 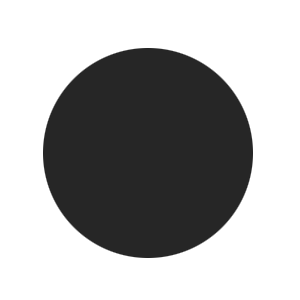 Ideally, get out into the ocean (don’t forget to wear your coral-reef-friendly sunscreen3) and marvel at the coral reef — it truly is an amazing underwater wonderland 🌎

Fall in love with it 💙

We are the ones responsible for this devastation

We are also the ones responsible for cleaning up this whole mess! Just as it took a number of people coming together in a collaborative effort to show us what was happening to our coral,  I believe that if we work together we can turn this thing around.

Here’s what you can do to help:

Get your passion-on
Watch the movies I outlined above. But, first please listen to this music video and fill your heart with gooey love, pride, honour and a sense of duty!

Tell me how long – this song plays through the closing credits of  Chasing Coral.

Note: Awesome actress, and all around good chick, Kristen Bell donated her talent and time to this project. (You might be more familiar with her – or her voice at least – from the movie, Frozen. She played Anna.) 💙

Do what you can to call attention to our plight
Tell your friends, family, and work colleagues – alert the world! And, tell them in a manner that suits you; be that in person, via social media, or by writing a blog-post 🤗

Keep it cool
Find out what you can do to keep our planet from over-heating; which is the ultimate cause of the coral dying.3

Read this –
Ten ways to reduce Greenhouse Gases – by Greenpeace.

It’s a trailer for “Cowspiracy”, the film that environmental organisations don’t want you to see! This is yet another truly eye-opening documentary, which I highly recommend you watch…

Watch this — from Chasing Coral
They show us how to take action in a myriad of ways.

We need to stop burying our heads in the sand! Instead, we need to submerge our noggins in the ocean 💧 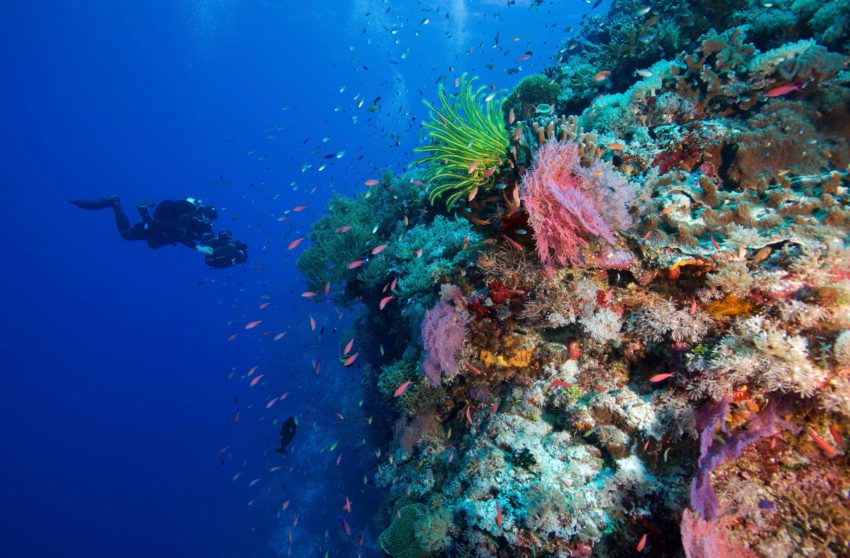 That's what she said

Dr. Sylvia Earle  is not only an Oceanographer but she’s also my hero.
She says this of our oceans:

“We’re losing diversity. We’re losing the pieces that make it all work together.  We don’t know how to put it back together again — once they’re gone. No ocean. No life. No us.”

She believes that ignorance is actually the biggest problem we face.


She says, that to most of us, the ocean will still look the same when it’s effectively empty. 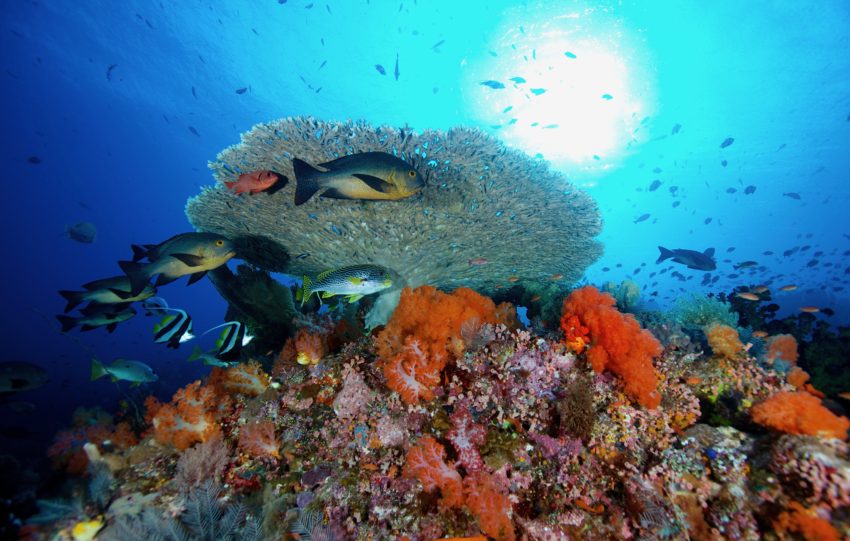 For other blog-posts that I've written related to our environment

Do we really need ‘dairy’ to get calcium in our diets

I’ve not eaten animals for 30 years.